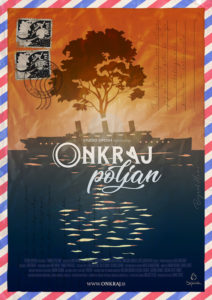 Beyond Home is the story of Tine and Manca, brother and sister, abandoned by their father to a vitiated family in the countryside. As their situation grows unbearable, Tine plans to leave his sister behind and cross the ocean in search of their father.

The film is written by Matjaž Feguš and produced and directed by David Sipoš who grew up in a small town Ptuj in the eastern parts of Slovenia. Despite being a real bookworm in his childhood he constantly found new adventures outside in the nature. After high school he decided to start learning about film making on his own and began making short films. His enthusiasm for the movie world led him to the USA where he got new experiences, but Slovenian cultural heritage offered him a lot of stories in his motherland. His latest movies include the short fantasy film, “Kresnik: The Lore of Fire,” various motifs from Slavic mythology and several biographical documentaries.